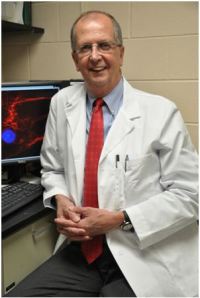 Dr. Steven P. Arnoczky is the Director of the Laboratory for Comparative Orthopaedic Research at Michigan State University and has been involved in basic science research of the musculoskeletal system for over 40 years. He began his research career at the Hospital for Special Surgery in New York City under the mentorship of Drs John Marshall and Russ Warren focusing on the basic science aspects of meniscal and ligamentous injuries of the knee.

Among his numerous honors and awards, Dr. Arnoczky has received the prestigious Kappa Delta Award for Outstanding Orthopaedic Research from the American Academy of Orthopaedic Surgeons and the Neer Award from the American Shoulder and Elbow Surgeons.  He is also a four-time recipient of the Cabaud Award for Soft Tissue Research, a two-time winner of the O’Donoghue Award for Sports Medicine Research, and the 2012 recipient of the T. David Sisk Award for best original research; all bestowed by the American Orthopaedic Society for Sports Medicine. In addition, Dr. Arnoczky was the 2010 recipient of Markowitz Award from the Academy of Surgical Research for his investigations into the basic science aspects of knee surgery. Dr Arnoczky has also received the Distinguished Faculty Award from Michigan State University and the Distinguished Alumnus Award from The Ohio State University.

Dr. Arnoczky has published over 180 peer-reviewed scientific articles, 150 scientific abstracts, and has written 77 book chapters. He has also co-edited 3 books on basic science topics related to sports medicine. Dr Arnoczky has given over 650 invited research lectures around the world. He serves on the editorial review boards of several orthopaedic journals and is a member of numerous research review committees. Dr Arnoczky is a founding member of the International Olympic Committee Olympic Academy of Sciences and an honorary member of the Arthroscopy Association of North America.

Dr. Arnoczky’s current research focuses on the role of mechanobiology in the pathogenesis and treatment of overuse injuries in tendons.

Arnoczky, S.P., and Warren, R.F.: The Microvasculature of the Meniscus and its  Response to Injury-An Experimental Study in the Dog, Am. J. Sports Med. 11:131-141, l983. (l982 O’Donoghue Award Paper-American Orthopaedic Society for Sports Medicine)

Michael E. Hantes, MD, PhD, is an Assistant Professor of Orthopaedic Surgery at the University of Thessaly, Larissa, GREECE. Clinical practice and research of Professor Hantes focuses on knee, shoulder, ankle and elbow joints. He is the current President of the Greek (Hellenic) Arthroscopic Association and Sports Medicine.

Dr. Hantes completed his medical degree at the Aristotle University of Thessaloniki in 1990. He trained in Orthopaedic Surgery at the Ioannina University hospital followed by fellowship training, in Sports Medicine and Knee Arthroscopy with Professor Hans Pässler (ATOS Klinik Center for Knee, Foot Surgery and Arhroscopy, Heidelberg- Germany) and Upper Extremity and Knee Arthroscopy with James Chow (Orthopaedic Center of Mount Vernon IL, USA). In 2008 he was appointed as an Assistant Professor at the University of Thessaly.

Dr Hantes received the Resident/Fellow Essay Award in 2002 from the AANA (Arthroscopy Association of North America). He has been selected for the ESSKA – APKASS (Asia-Pacific Knee, Arthroscopy and Sports Medicine Society) travelling fellowship in 2006.

Professor Hantes is the founder of the Larisa Arthroscopy & Minimally Invasive Center (LAMILC) http://www.ortho-uth.org/lamilc/ and organizes seminars in Athroscopic Surgery with the aim of educating young physicians in the field of arthroscopic surgery and sports medicine on a regular basis.

He is member of many scientific societies and except AJSM is an editorial board member of KSSTA (Knee Surgery Sports Traumatology and Arthroscopy).

Dr Hantes lives in Larissa, GREECE with his wife Erica and his two children Ilias and Artemis.

Selected Published Works in Other Journals

Repair of an anteroinferior glenoid defect by the latarjet procedure: quantitative assessment of the repair by computed tomography.  Hantes ME, Venouziou A, Bargiotas KA, Metafratzi Z, Karantanas A, Malizos KN.  Arthroscopy. 2010 Aug;26(8):1021-6